The main ingredient in natural gas, methane is very effective at trapping and producing heat while throwing off less carbon monoxide and smog than other fuels. Extracted from landfills, conveyed by pipelines, it can be burned for electricity, heat and power.

But methane can be problematic. It’s odorless, colorless—and flammable. Since up to 98 percent of landfill gas is either methane or carbon dioxide, it can become explosive if overly enclosed and insufficiently ventilated. Coal and methane can combust, causing mining disasters. Methane can displace oxygen and make air less breathable. Cast-iron pipes can degrade with age, allowing methane to escape. Explosions are fortunately uncommon, but put personnel, projects and surrounding communities at risk when they happen. More mundanely but important to the bottom line, lost methane equates to lost revenue.

Detecting Methane buildups is crucial in a world of major energy needs and rapid energy change.

Located south of Erie, in Conneaut Lake, Pennsylvania, Tru- Tek Drilling opened in 2000 to specialize in utility construction and pipe installation. By February 2018, it was ready to expand. “The owners decided that they wanted to add another service,” recalled Mark Sakach, Director of Operations, Ravan Air, “and drones looked like a good fit.” Sakach came to Tru-Tek from the natural gas industry for the launch of Ravan Air, which would specialize in UAV methane gas detection, drone GIS mapping, drone oil and gas leak detection inspections and compliance, pipeline monitoring and UAV emergency management services. Sakach soon moved up from project manager to become director of operations for the spinoff.

As a drone service provider, Ravan Air chose the Microdrones mdTector1000CH4 with a Pergam methane detector/gas sensor to build out a business that eventually would monitor landfills, pipelines and utilities. For Sakach, “ The Microdrones airframe is one of the best made with a carbon fiber body. As far as an industrial drone, we feel that they make the best. ” This drone can fly in straight-down rain, and can operate in heavy winds. “And customer support, they’re up there. They’re obviously the best for us.”

Within two months of its inception, Ravan Air was running demonstrations, deploying the md- Tector1000CH4 to a list of infrastructure customers. “Landfills really like the service we offer.”

Sakach outlined the efficiencies drone s provide for pipeline methane detection compared with on-the-ground personnel. Interestingly, speed across an open field was not a stated advantage . “I’m not necessarily going to do it faster than a guy walking across the field. You fly slow to detect methane.” Since avoiding explosions is crucial, the drone moves slowly: five to six ft/sec at 75 feet altitude over a methane pipeline, 10 to 15 ft/sec over a landfill. But drone speed is largely terrain-independent. “A guy walks two-to-three mph in good conditions,” Sakach said. “We did a 376-acre landfill in 11 hours, which would take that guy five days. We’re flying 50-foot swatches.” Customers also can factor in wind speed for their operational assessments. “Compared to the walkers. I’m more accurate because I have a better indication.”

When Sakach researched operations in West Virginia, personnel safety and liability also emerged as adoption drivers. Even a simple ankle sprain by ground employees could dearly cost an operator, he found. And vulnerability only increases with difficult topography. “Working on the side of a mountain at a 45-degree angle, that’s going to put an employee at risk,” Sakach noted. The same risk applies to expensive equipment. While no drivers were hurt, the company where Sakach previously worked “probably lost 5 ATVs—that’s a $5,000 to $8,000 machine at the bottom.”

In addition to its rugged airframe, the mdTector100CH4 software fully integrates an aerial methane inspection package. Combined with Microdrones’ intuitive workflow of Plan, Fly, Process and Visualize, Ravan Air can get to work quickly, searching for methane leaks.

To begin their plan, operators enter their mission into the MdCockpit Tablet Software, which plans and monitors progress along the survey area on an Android tablet. During the flight, a methane-dedicated Pergam LM Gen 2 gas sensor with an infrared laser/reflected-light analyzer, an FVP camera and an onboard .csv HD video link all work together to detect methane and the gases containing it from 1-50,000 ppm x m. Then they can process all exported post-flight data and visualize one convenient map. Providing a spreadsheet and the video, the collected data “indicate methane way before you get into an explosion,” Sakach said.

Readings of 250-450 ppm are considered to be in the yellow zone, with red alert starting at 450 ppm. “Fourhundred- fifty ppm is what we consider actionable,” Sakach noted. “They need to go and look at it.” But in environments where a pile of leaves can produce a reading of 1,000, follow-up qualification is the job of the landfill or pipeline operator. “We read the lay of the land. I look for indications, I never want to qualify.”

Because the Microdrones solution captures data autonomously, it also avoids any chance of what Sakach calls “pencil-whipping.” A ground pipeline walker is carrying a 10-15 pound detector. If equipment indicates any parts per million, he or she has to go back and qualify it. This can become problematic in hard-to-reach areas. “If a guy says he did it, how do you know,” Sakach asked rhetorically, without accusing anyone in particular. “I can’t fake this data.

“Apples to apples, I’m going to be as or more accurate,” Sakach continued. “I can give you an entire report with a video to back that up. And it’s faster. We’re going to fly up and down in a minute; the guy on an ATV is going to take an hour. And if he has to worry, how accurate is he going to be?”

Sakach also appreciated the multiple referencing afforded by drone operation. “We come back, they see an indication live or downloaded, and here’s what I saw with the camera at the same location. It’s not only georeferenced but has a video reference.” 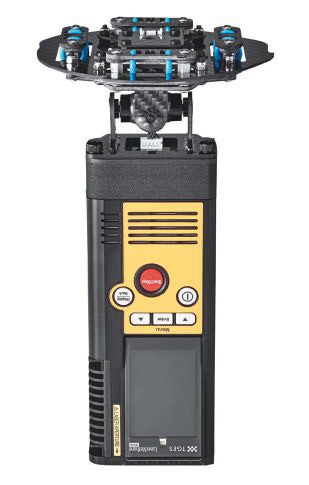 Ravan Air’s highest reading has been in the 1,200-1,500 ppm range; the company has never unearthed a huge leak, but methane detection is a better-safe-than-sorry business. Some customers initially had a hard time understanding the technology. “They are seeing it now. The landfills are taking off. On the landfill side, it’s been 5 times easier. I can prove how fast I can get it done.” Ravan Air has surveyed four landfill sites and is working on “a lot more.”

The natural gas pipeline industry has been slower to adopt due to price sensitivity, concerns about Public Utility Commission rules and regs, and user questions about plume height and some readings not even showing on traditional equipment. Nevertheless, two forward-thinking pipeline companies have retained Ravan Air for a range of scans.

Sakach expects business to “expand quickly”—in three years, he hopes to have 10 crews at work, and not just in Pennsylvania. Ravan Air also is looking at buying a mdLiDAR3000 system from Microdrones. It’s being tested with a company now for accuracy and consistency. In addition to increasingly precise scanning, Sakach would “love to see data sets that we can sell.”

As for the Microdrones mdTector1000CH4, Sakach appreciated being able to watch it in real time. “It works well for what we need. The video camera has been upgraded.”