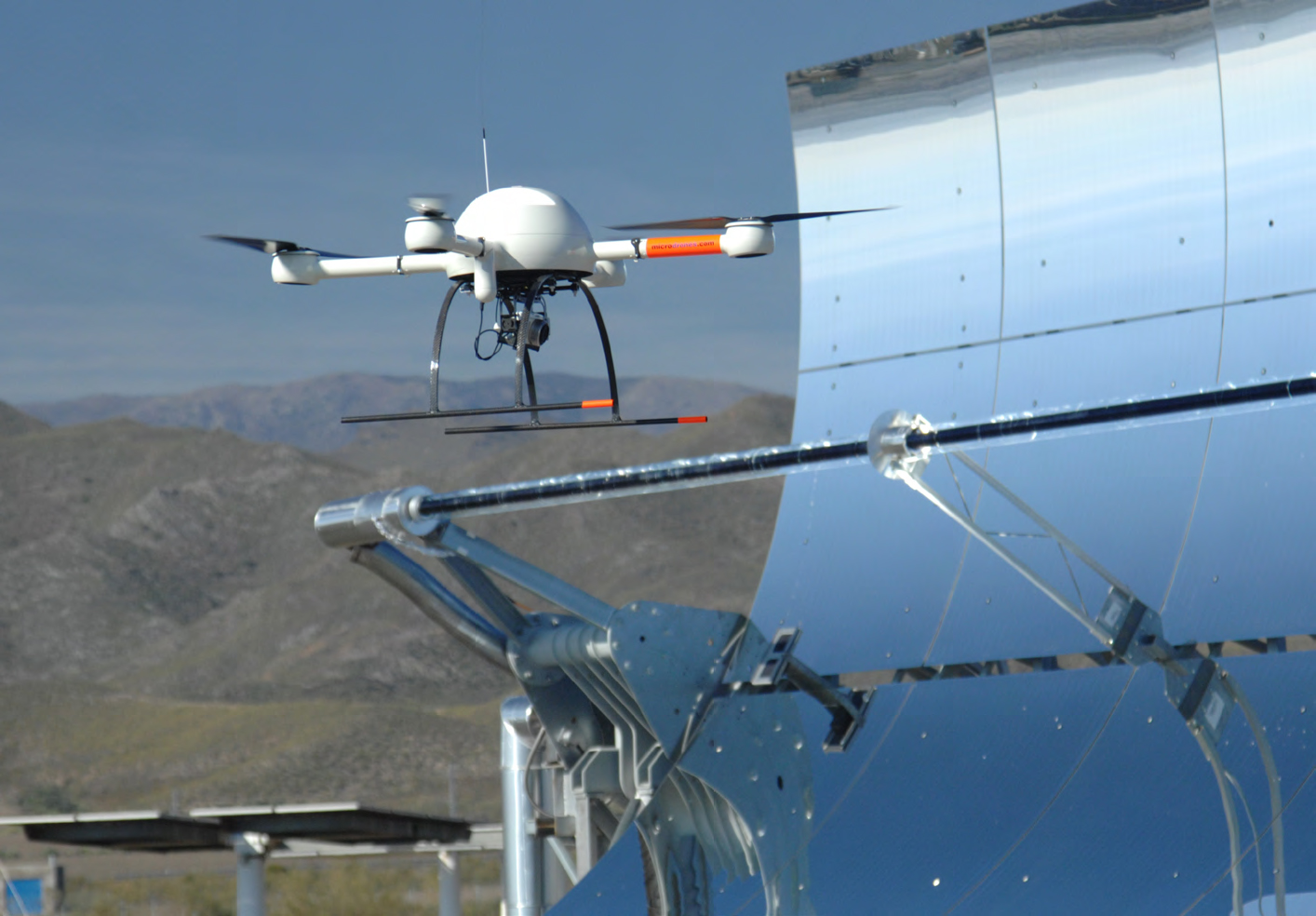 As one of the world’s leading concentrating solar power (CSP) research facilities, the Institute of Solar Research of the German Aerospace Center (DLR) is always looking for ways to hone solar energy technologies and improve solar power plant performance.

CSP uses a large array of mirrors that focus solar radiation onto a small area, and is a complement to the popular, low-cost photovoltaic (PV) cells in a completely new grid system. PV cells power solar plants by converting sunlight into electricity. CSP, on the other hand, stores energy thermally, can be turned on and off on demand, and can deliver power even when there’s no sun. For this to happen, the array of mirrors must be inspected to ensure they’re working as they should.

Back in 2009, the DLR team began looking into how unmanned aircraft systems (UAS) could make parabolictrough solar field inspections more effective, and quickly determined Microdrones offered the solutions they needed to map these solar structures, said Christoph Prahl of the DLR. The Microdrones md4-200 and md4-1000 are deployed through what is known as the QFly project.

“These mirrors need to be aligned very precisely concerning their geometry,” Prahl said. “We have different types of optical measurement technologies and take images of these mirrors to get their geometry. Then we can calculate the performance of these concentrated solar panels.”

The team completed the first successful UAS flight over a Spain-based solar power plant in 2014. They now fly between 50 and 100 missions a year with the md4-1000, Prahl said, collecting aerial images to find defects in a mirror’s shape, module orientation, torsion, or tracking deviations. About 60 collection segments can be inspected in one day.

Once the images are gathered, they are evaluated with a corresponding software, enabling the team to determine the optical and thermal properties of the solar field—and ultimately how the station is performing.

Before investing in the Microdrones systems, Prahl and his team acquired the images they needed via cherry USER SHOWCASE pickers, which wasn’t very efficient. Deploying UAS saves both time and money, and makes it possible to perform inspections without shutting these stations down. In just 30 minutes, the drone can gather the high-quality images needed to perform the required calculations—images they just can’t get from a camera on the ground.

“The benefit of using a drone is you have a larger variability in perspective,” Prahl said. “It’s not possible to characterize solar plants if you’re taking images from the ground. Taking images from the air is much faster. It can be done automatically. If you tell the drone how to fly, it launches, takes the images and comes back. It’s efficient and fast and gives you good quality data.”

For now, DLR flies optic and infrared cameras on the drone, Prahl said, but they’re also interested in adding gas detectors. These sensors would identify any leaks from the transfer fluid system. They’re looking at various models now and hope to find one that’s not only sensitive enough to detect oil leaks, but that can also easily be deployed on the drone.

“These solar plants use heat transfer fluid. It’s what takes heat from the power plant to make it available in the power block to produce electricity, depending on the technology the plant is using,” Prahl said. “This is an organic oil you have pumping through the power plant. You can have leakages where this hot oil may get into the environment. It’s important to detect these leakages as early as possible.”

When DLR first began researching systems, they wanted a drone that featured a long-endurance time, that could carry 1 kilogram of payload and that offered automatic waypoint navigation. The Microdrones system checked all those boxes, but the company was also attractive because of its global presence, Prahl said.

One of the main challenges DLR faces in deploying UAS technology to inspect solar panel stations is the different regulations they must adhere to in every country they work in, Prahl said. While they have the necessary permissions to fly in Spain, that doesn’t carry over to other solar plants around the world that could benefit from this technology.

“The solution is to have a drone provider or drone company that has a worldwide presence,” Prahl said. “A UAS service provider in the country where you want to work.”

Microdrones also provides excellent customer service, Prahl said, and he knows he can turn to them if he ever needs guidance.

“We have continuously used their products and services since about 2010,” Prahl said. “We’ve bought two drones from them but also have been able to upload firmware and update payloads. We can call to check new functionality and how it will impact the drone. Microdrones has very good service after the sale; they are happy to help with questions, training and support.”