Before Ashley Thomas Pittman and the team at Brent Scarbrough & Co. Inc., a Georgia-based heavy steel construction company, clears a site for a project, they need to know its contours and how much dirt must be brought in or taken out to achieve the proper elevations. The engineer-supplied topographic maps are designed to provide that guidance but often aren’t very accurate—leading to extra work that costs time, money and frustration.

That’s why Pittman, who’s with the company’s GPS/ Layout Department, decided to start looking into using an unmanned aircraft system (UAS) to create these maps, and ultimately invested in the mdMapper1000DG from Microdrones about a year ago. Deploying the system is more efficient and safer than traditional surveying methods, and provides the information he needs to efficiently complete his job.

“We were having a big disparity between the existing topo that came with the set of plans and what we were finding on the site. We really found some shocking differences,” Pittman said. “We’d be two-thirds or three-fourths done with a site and realize we didn’t have enough dirt or that we had too much dirt. That should be worked out ahead of time. We can raise the site according to anticipated overages or shortages at no additional cost if we know in advance. When we’re surprised toward the end, we have to remove all the dirt to fit a different type of topo.”

The Benefits of UAS

Brent Scarbrough typically works on large sites that are between 50 and 60 acres, said Matt Rosenbalm, the Microdrones Southern U.S. sales manager. The sites are filled with heavy equipment and often have treacherous terrain. Before the construction company began deploying the mdMapper1000DG, two or three workers would survey the sites with a GPS rover, a time-consuming, often dangerous, task. Now, they can get the data needed to build 3-D modules and perform volume calculations in minutes. 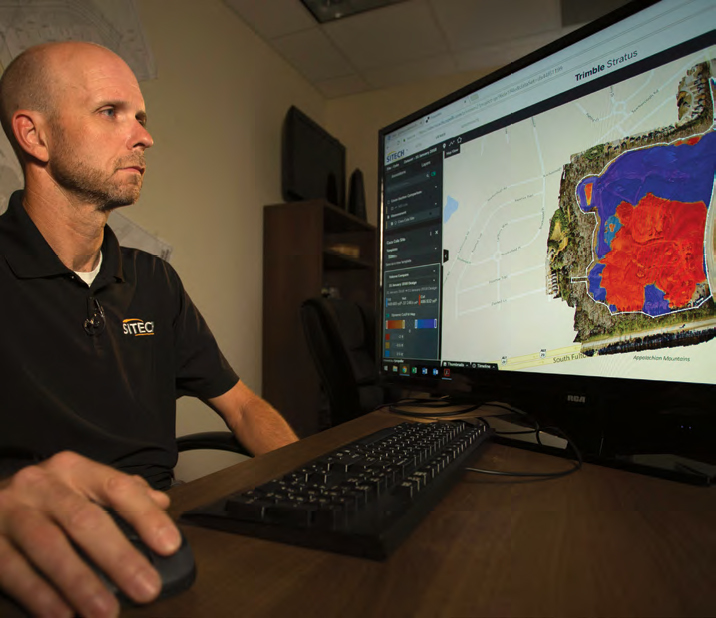 “A drone flight takes a fraction of the time of almost anything we were doing by hand with conventional GPS instruments,” Pittman said. “I can topo a 10 acre site that might have taken a day to complete in 12 minutes. Twelve minutes versus 10 hours is kind of a no-brainer.”

The company has one drone pilot who handles all the flights, Pittman said. He was trained by SITECH South, the region’s official Microdrones distributor. He can fly as much as needed, usually 2-3 times a week. The pilot then processes the data, which takes about four hours to complete. The drone also now comes equipped with LiDAR, making it possible for the team to access data in less than an hour.

“Because we’re saving time we can topo way more than we ever did,” Pittman said. “And it frees up our crews to do what they need to do rather than working on a topo. That was traditionally part of their jobs, but we’ve been able to separate that out because of the drone technology.”

The high-resolution photographs the UAS collects also can be seamlessly stitched together to create mosaics of every site, Pittman said.

“That really helps when the owners, developers or anyone has a question about something on the topo,” he said. “I have a high resolution photo that shows what type of material is on a site. We can then do a stock pile evaluation and see how much of that material is there.”

When the construction company first decided to invest in a drone, the team knew they needed a commercial grade system with endurance, said Paul Shepard, a Sales Engineer for SITECH South. Brent Scarbrough purchases GPS solutions from SITECH South, so it made sense for them to consider Microdrones first. After they learned more about the mdMapper1000DG, it became clear it was exactly what they were looking for.

“They knew they’d f ly the system several times a week, and needed a drone that could handle a heavy workload as well as carry various payloads, including high-res cameras and LiDAR,” Rosenbalm said. “The mdMapper1000DG offers both, and has motors that last up to 10,000 hours with little maintenance. The system’s lower speed also produces less noise, which means it can typically f ly undetected.”

“With a traditional drone, you’re going to put out 10 to 15 ground control targets,” Shepard said. “They would have to put those out uniformly across the site, intermingling with the machines. By using the mdMapper1000DG, they only need a few ground control targets, which speeds things up and keeps them out of harm’s way.

After investing in the drone, it took time for the team to incorporate the best workflow, Pittman said. They were bringing in bad data at first, but with guidance from Microdrones and SITECH South, they now have an efficient solution that quickly provides them with accurate topographic maps.

“They worked with us to make sure all the settings on the drones were correct and that we knew what they were,” Pittman said. “Flying the drone is the easiest part. The hardest part is doing the processing and having a guy in place who can replicate a good process over and over. We’re finally at that point.”

Developing accurate topographic maps can be expensive, which is why many owners choose to go with less costly, but also less accurate, methods to obtain them, Pittman said. Often, the maps aren’t a true representation of the site, which can cost construction companies a lot of time and money. The drone gives Pittman and his team access to a more accurate topographic map in less time than traditional methods, ensuring they’re properly prepared for the project from the beginning.

“The engineers can get the topo from a variety of places, whether it’s LiDAR, flood mapping or GIS. That makes a big difference, but we never know where they come from,” Pittman said. “It could be really close or it could just be an assumption of what the contours are. When we fly the drone, we get a topo we can compare to what the engineer thinks the site looks like before the dirt starts moving.”