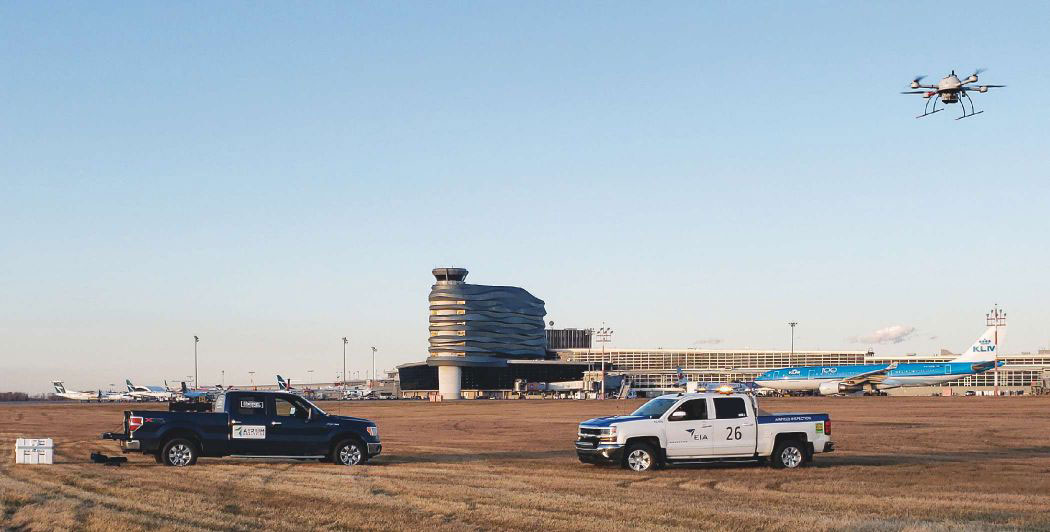 AERIUM Analytics, a Canada-based unmanned aircra systems service provider, is focusing on an area that most other providers aren’t: its team recently used the mdLiDAR1000 system for projects at two airports in Canada.

AERIUM first began flying at airports in 2017, focusing on wildlife management and data collection. While the team uses other systems for the wildlife aspect, the mdLiDAR1000 has proven to be valuable in collecting high quality data sets to be used for engineering and design by AERIUM’s airport clients.

AERIUM purchased the mdLiDAR1000 in early 2018 to offer clients a more complete data collection solution that goes beyond basic videos and photogrammetry. And because of the focus on serving airport clients, the team knew whatever LiDAR-equipped system they chose would be operated in controlled airspace. After doing research, AERIUM found that Microdrones offered a robust, reliable and highly accurate solution, and was one of the few drones compliant with Transport Canada regulations for flight in controlled airspace.

“We have flown runways in the past using photogrammetry and we discovered that due to the nature of runway surfaces, photogrammetry requires specific conditions in order to be as effective as LiDAR for data analysis,” said Brandon Southgate, remote sensing and geomatics specialist for AERIUM Analytics. “It’s hard to resolve and build a point cloud using paint lines and bare concrete. Instead of an indirect measurement, LiDAR is a direct measurement, so we’re able to get a much more accurate height of the runway surface with LiDAR than with photogrammetry.”

“Time saved is definitely a big aspect of it. But the data quality or point density is probably the biggest benefit.”
Brandon Southgate
remote sensing and geomatics specialist, AERIUM Analytics

AERIUM completed a project at the Edmonton International Airport in Alberta last October. The team deployed 10 flights in one day, covering two runways, Southgate said. The client is using the data collected to build engineerbased data sets on how the runways look structurally, helping to determine if any repairs are needed. They’d also like to look at taxiways and aprons, which is a project Southgate expects to complete in the near future. That information will be used to help with design engineering and water management.

During the October project, the runways only needed to be shut down for a brief period, Southgate said. While AERIUM flew the system over one runway, air traffic was directed to the other runway so that both could be flown without a huge impact to the airport. This required a lot of communication with the air traffic control tower, Nav Canada and the airport.

The client is now going through the data collected, and so far is happy with the project. Edmonton International is one of the few airports actually using drones, and the team there has been very excited about the projects AERIUM has completed. They’ve been working with the service provider for nearly three years, starting with a focus on wildlife management and then moving on to including the LiDAR flights with the Microdrones integrated system.

Last summer, AERIUM f lew a five-day project with the mdLiDAR1000 at the Erik Nielsen Whitehorse International Airport in Yukon. Like in Edmonton, the team collected data for engineering purposes and water management. The drone completed about 25 flights, covering the entire airport.

Originally, AERIUM was brought on to help determine which of the trees located at the end of one of the runways were problematic. The system was able to collect the data needed to identify which trees should be cut down and which were in the correct range limit.

Most other airports are completing these types of projects by manually surveying with a total station or GPS receiver on a pole, or by using manned aircraft, Southgate said. When manned aircraft come in, it requires much bigger, more expensive equipment, and the process is significantly slower. So, in the case of the project completed in Edmonton, runways would have been shut down much longer, resulting in a bigger impact on the airport.

“Time saved is definitely a big aspect of it,” Southgate said. “But the data quality or point density is probably the biggest benefit.”

Another benefit of using the Microdrones system is the ability to collect data more frequently for better tracking. Typically, projects like the one completed in Edmonton only happen once a year because of the time required and the expense. Using drones, data can be collected as often as the airport wants to collect it.

When deploying drones at an airport, the biggest challenge is of course regulatory, Southgate said. That’s why having a compliant, reliable system like the mdLiDAR1000 was so key.

“Just getting access to the airspace for the time required, that’s the toughest,” Southgate said. “Because the engineering groups and the GIS teams definitely want the data.”

Another challenge is the perception people have when it comes to drones flying in and around airports. Many people don’t understand drones can be used in positive, controlled ways in this space. Projects like these can build community confidence. 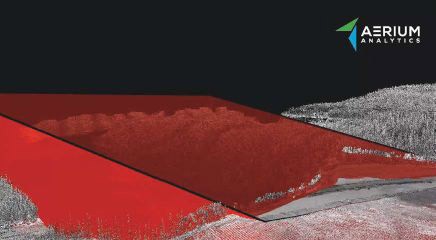 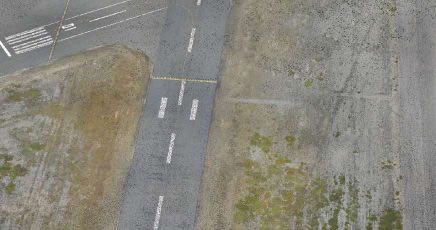 Data collected with mdLiDAR1000 is used by airport clients for future engineering and design planning.

Not only does Microdrones offer a compliant system that can be flown in restricted airspace, the robust, complete solution makes it possible for Southgate and his team to collect highly accurate data for airport clients.

“We needed the system to be reliable,” Southgate said. “We’re usually able to collect the data we need and keep going. When we do have issues, Microdrones has been pretty responsive. They’re always just a phone call away.”