IT’S TIME TO STEP OUT OF THE OFFICE AND INTO THE FIELD.

Presented by Microdrones, the series will also showcase the powerful data deliverables their integrated systems can create like 3D pointclouds, orthomosaics, or methane inspection concern maps.

The first 3 episodes, titled “The Ozarks” will take viewers on an edge-of-your-seat journey alongside Crafton Tull as the engineering and surveying attempt to map a path for a road through Arkansas’s treacherous Ozark Mountain Region.

The series will capture the adventures, obstacles and all-too-real danger professional surveyors face while marking boundaries, measuring distances and working to deliver actionable insights about the natural landscape.

In the first episode, you’ll meet the Crafton Tull team and learn about their mission – delivering key data on 150 acres of the cliff-filled region of Big Creek where they are tasked with surveying the site so that their engineers can design a road through the heart of the mountainous terrain.

In short – it’s a tall challenge for both Crafton Tull and Microdrones.

“The challenge on this project is the terrain, from surveying the top to the bottom of the mountain,” said Crafton Tull Vice President of Energy Services, Nick Tucker.

Throughout the series, you’ll see how Crafton Tull attacked this challenging terrain head-on with the Microdrones mdLIDAR1000, leveraging the drone to navigate an elevation change of more than 500 feet. 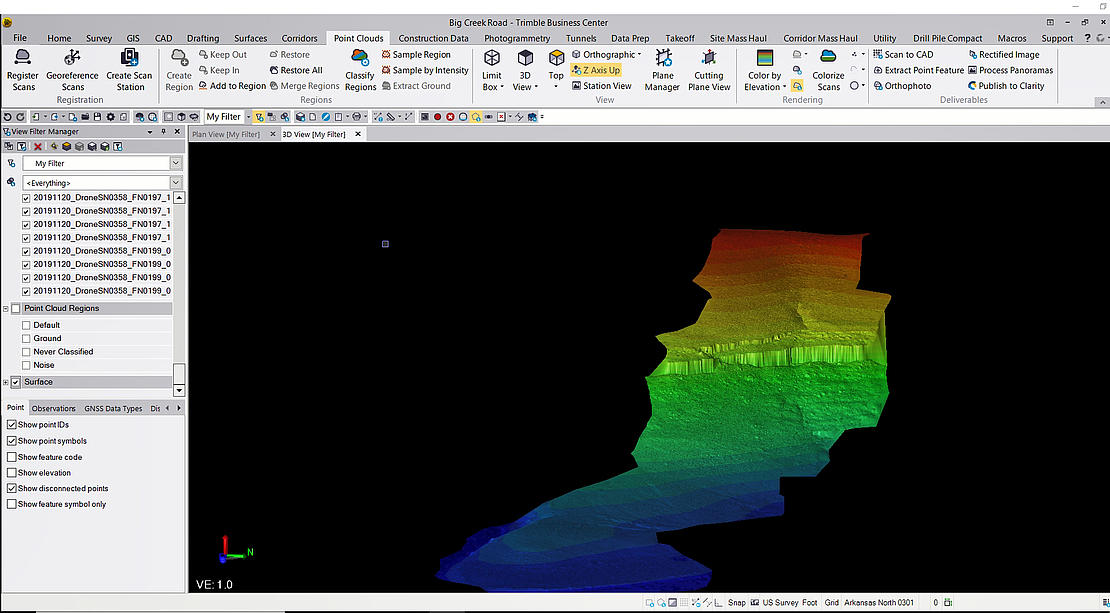 Without a drone and with a regular survey crew out here, you’re looking at probably two to three weeks of field work to get this surveyed,” Davis said. “It’s dangerous, too, because there are some sheer bluffs on here that would be really challenging to get data on.”

Providing support and technical assistance was Microdrones Southern U.S. Sales Manager Matt Rosenbalm, who was confident the mdLIDAR1000 could overcome the daunting challenges of the Ozarks.

“I always like to see what kinds of projects they’re using our systems to do,” Rosenbalm said. “This one is obviously putting everything to the test, and it’s kind of neat to see how we tackle this.”

In episodes 2 and 3  you’ll see how the Crafton Tull team adapts to new challenges and problems, collects and analyzes critical data, and find out if the team’s mission to translate the region’s intimidating terrain into actionable insights was a success.

“We frame Down to Earth within the genre of a reality series, because part of the show is watching surveyors work out in the field, set up their equipment, and deal with all the different elements and challenges they face,” said Microdrones Marketing Director Bret Burghdurf. “Plus, it’s more engaging and fun to watch. But at the end of the day, whatever happens in the field, they’re still responsible for getting their job done.  This series demonstrates how Microdrones can make that process more efficient with powerful end deliverables from our systems. If you want to see real surveyors overcoming difficult field challenges and collecting really good data, then watch Down to Earth.”

If you would like to speak with a representative from Microdrones to learn more about adding drone-based LiDAR to your workflow, CLICK HERE