A historic golf course in Denver, CO. became the hotspot for a demonstration of next gen integrated UAS mapping technology.

Denver Public Works and Denver Parks & Recreation are facilitating a complete redesign and revitalization of the 200-acre City Park Golf Course to integrate storm and groundwater drainage systems as part of a larger flood mitigation program in the city.

The project’s contract documents outline some sitespecific development requirements to support the stormwater management such as the integration of storm and groundwater drainage systems to temporarily hold and slow floodwater during major storms. Environmental specifications for reforestation require the contractor to carefully monitor earthwork and site development activities.

Working with the general contractor, Frontier Precision, a survey and civil engineering company headquartered in Bismarck, North Dakota with offices in Colorado, used the opportunity to compare the latest in fully integrated UAS-based LiDAR and direct georeferencing with conventional survey mapping techniques.

Nathan Stephenson, laser scanning engineer in charge of technical scanning services with Frontier Precision, was particularly excited about seeing the mdLiDAR1000 solution for the first time. He added, “We haven’t supported aerial LiDAR platforms to-date because the technology was still being developed and wasn’t yet at a cost-effective rate. But, from a technology perspective, we are moving more to the use of LiDAR with direct georeferencing because of the technology’s flexibility, ease of data collection and improved safety because of limited need for ground base stations.”

Stephenson worked with Yannick Savey, Microdrones LiDAR test pilot, to develop the flight plan. The LiDAR data was collected in four flights, each about 20 minutes in length at 3.5 m/s at an altitude of 40 m. The survey team was able to fully map the 200-acre site in less than 50 minutes with the help of direct georeferencing.

According to Microdrones, direct georeferencing is a highly efficient method for connecting aerial images to their geographic positioning on the Earth’s surface. Key in the process is the integrated GNSS/IMU that measures the true 3D coordinates and orientation angles of the sensors, which allows for direct map production. Direct georeferencing has been shown to surpass the accuracy of others georeferencing methods such as traditional aerial triangulation, RTK, and PPK. RTK and PPK have inherent problems that reduce their accuracy, productivity and efficiency. Many of these problems are revealed upon a detailed analysis of their associated mathematical and scientific principles and calculations. One of the major factors for the reduced accuracy of RTK and PPK is the calculation of orientation angles of any sensor. Direct georeferencing measures the orientation angles of the imaging sensor with high accuracy and high frequency at 200Hz or more (200 times per second)

After completing the f lights and post processing the data, Stephenson was sold. He said, “It took us six hours to f ly, process and produce the topo and contour map. That’s impressive. We really liked the fact that it is a turnkey fully integrated solution where the sensors, particularly the IMU/LiDAR, all talk to each other.” 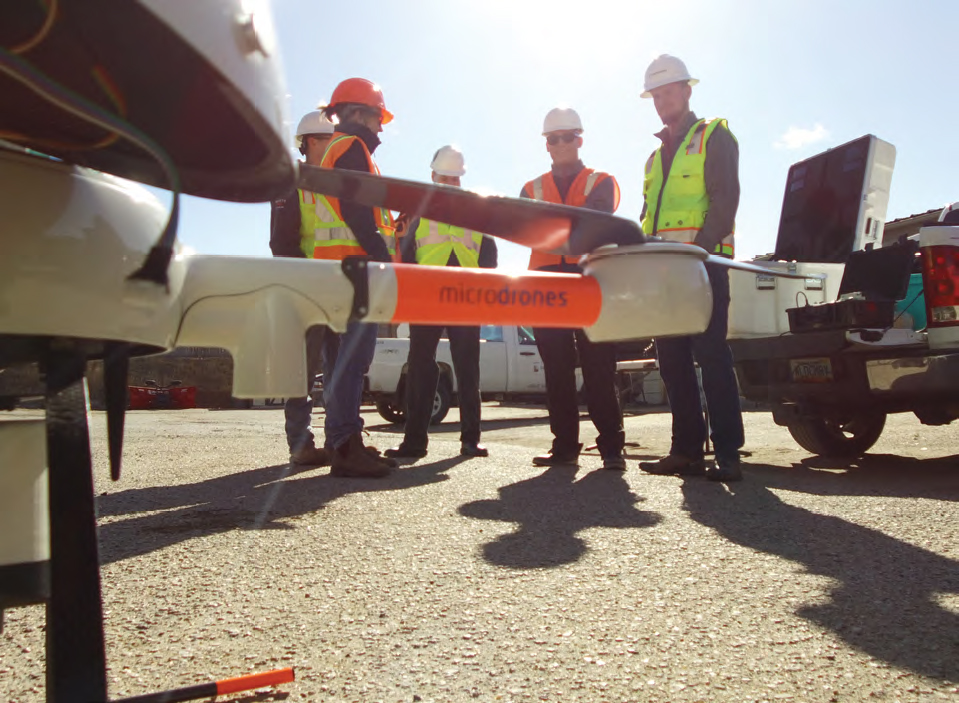 The Forest of Trees

For the general contractor, one of the biggest advantages of the LiDAR-based solution on the golf course project was the visibility through vegetation. As part of the design, the new course design incorporates a detailed reforestation plan to preserve existing healthy stands of trees and maintain the park-like feel. Ultimately, the course will have a net gain of 500 trees.

As part of the owner specifications, the contractor is not allowed to develop the site within 1.5x the canopy width of trees. As part of the mapping process, Frontier Precision used the LiDAR data to produce a topographic survey and contour map with an emphasis on tree widths.

Stephenson says, “The greatest value for us from this project was how quickly this type of data can be collected. The contractor had performed a similar topographic survey of the site prior to construction, which took approximately two weeks and considerable labor and equipment costs. Now we’ve got some real-world cost metrics that demonstrate the value of a fully integrated UAS-based LiDAR solution.”

Talking about the mdLiDAR solution, Microdrones Savey concluded, “This project effectively demonstrated the efficiency of our system. In less than two hours, we were able make a full map of the site with a LiDAR and it took less than 50 minutes to do so with a direct georeferencing. We believe the combination of efficiency with the great precision of our systems, and the professionalism of the team, is a recipe for success.