As a family-owned company that provides land surveying, GIS, engineering and environmental services, the team at Morris P. Hebert Inc. (MPH) saw the many benefits unmanned aircraft systems (UAS) could provide, including saving time and giving them the ability to deliver even more robust mapping products to their clients.

To get started with the technology, MPH invested in a fixed-wing system that made remote sensing with photogrammetry possible. That was three years ago, and at the time, a fixed-wing solution seemed like the best way to go. The team soon realized they wanted to do more with the technology than traditional photogrammetry would allow, and that they’d need to invest in a robust quadcopter or rotary aircraft that had the ability to take on different sensors—including LiDAR—to get the most benefit, Research and Development Coordinator Lee Drennan said.

That led them to the mdLiDAR1000, Drennan explained. Bringing LiDAR into the mix has been huge for the company, allowing them to simplify their workflow and increase their corridor mapping productivity.

“We knew from flying photogrammetry that there were limitations to what you could do with photogrammetry,” Drennan said. “It only sees what it sees.”

“We basically were able to increase our productivity from 1 mile a day with the 1000 to 3 to 4 miles a day with the 3000 while simplifying the entire process.”

According to Drennan, the team was taking on work in heavily vegetated areas and needed LiDAR to penetrate through that vegetation to provide more accurate terrain models. The mdLidar1000 accomplished the job and helped MPH make the decision to invest in the mdLi- DAR3000 which can carry a larger and more accurate Lidar scanner, such as the Riegl miniVUX-1UAV.

MPH also started picking up projects from a local utility that tasked the team with completing different types of surveys, though corridor mapping was the primary need, Drennan said. The challenge? The client told them they couldn’t fly directly over the powerlines. That meant the drone had to cross the line at 90 degrees going back and forth. The corridor mapping feature Microdrones offers made it possible to fly parallel to the lines rather than perpendicular, a feature Drennan describes as game changing for MPH.

“Not only did it help get us better data but it also made our flying more efficient because we were able to fly two long lines at a time instead of flying 30 small lines,” said Jonathan Morris, vice president of remote sensing for MPH. “We were able to get more done in a day.”

While this was a more efficient way to complete the work, the team still needed photogrammetry—which meant the projects required two flights: one to collect information using photogrammetry and one to gather data using LiDAR.

“There’s a couple of things that aren’t ideal with that,” Drennan explained. “Obviously, it’s two flights, but in addition to that you’re not capturing exactly the same data set when you fly two separate flights, especially if the flights take place at two different times of day, or in some cases, not even on the same day.”

The mdLiDAR3000 eliminates this challenge, Drennan said. With this system, they only have to fly once to collect the information they need, allowing them to cut the number of flights in half and to capture identical data sets each time.

The LiDAR and the IMU on the mdLiDAR3000 system allows them to capture more data with greater accuracy than the LiDAR on the mdLiDAR1000. That makes it the ideal system to deploy when a survey requires classification of individual wires, for example, which is what the utility client needed.

“Having this propensity of data is very beneficial,” Drennan said. “We basically were able to increase our productivity from 1 mile a day with the 1000 to 3 to 4 miles a day with the 3000 while simplifying the entire process.”

The Benefits of Having Both Systems

MPH has one or both of these systems out in the field just about every day and Drennan explains that they both have their strengths.

The versatile mdLiDAR1000 has a great flight duration and allows for various payload options. Its LiDAR offers less point density than the mdLiDAR3000, but that isn’t always an issue. If they’re completing a terrain model in the desert, for example, that doesn’t require the same level of detail as when they need to pick up power lines. The system gives them good, clean data and is an excellent solution when they only need to capture photos or penetrate small areas with LiDAR.

When higher point density is needed along a route or more detail is required, that’s when they fly the larger mdLiDAR3000 that comes equipped with a Riegl miniVUX-1UAV or miniVUX-1DL paired with a 42.4 megapixel Sony RX1R II camera. And of course it gives them the ability to capture all the information they need in one flight as opposed to two. 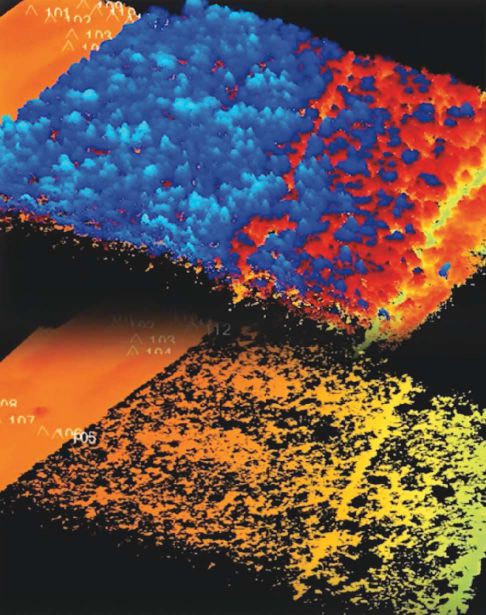 In areas of high vegetation, LiDAR can streamline your workflow and help increase the efficiency of your project.

Why Microdrones? The Answer is Fully Integrated

When looking for a system, Morris team at MPH knew they wanted something that was turnkey. They had no interest in engineering a system, and needed a reliable solution that was ready to go out of the box.

“Everything being fully integrated was a big thing for us,” Morris said. “We didn’t want to have to turn one thing on individually because the more pieces you have to turn on or turn off or use software to update, the more chances you have for error in the field and in the office. We were looking for something with an integrated setup that was easy and efficient for what we needed it to do.”

Between the two systems, MPH has flown more than 600 flights, with the team at Microdrones offering them the support and guidance they need to get the best results for their clients.

“Microdrones has been a big part of helping us keep both units in the air,” Morris said. “Tech support is always ready to answer questions and help us through any issues. And we’d like to think they developed the corridor mapping feature just for us.”