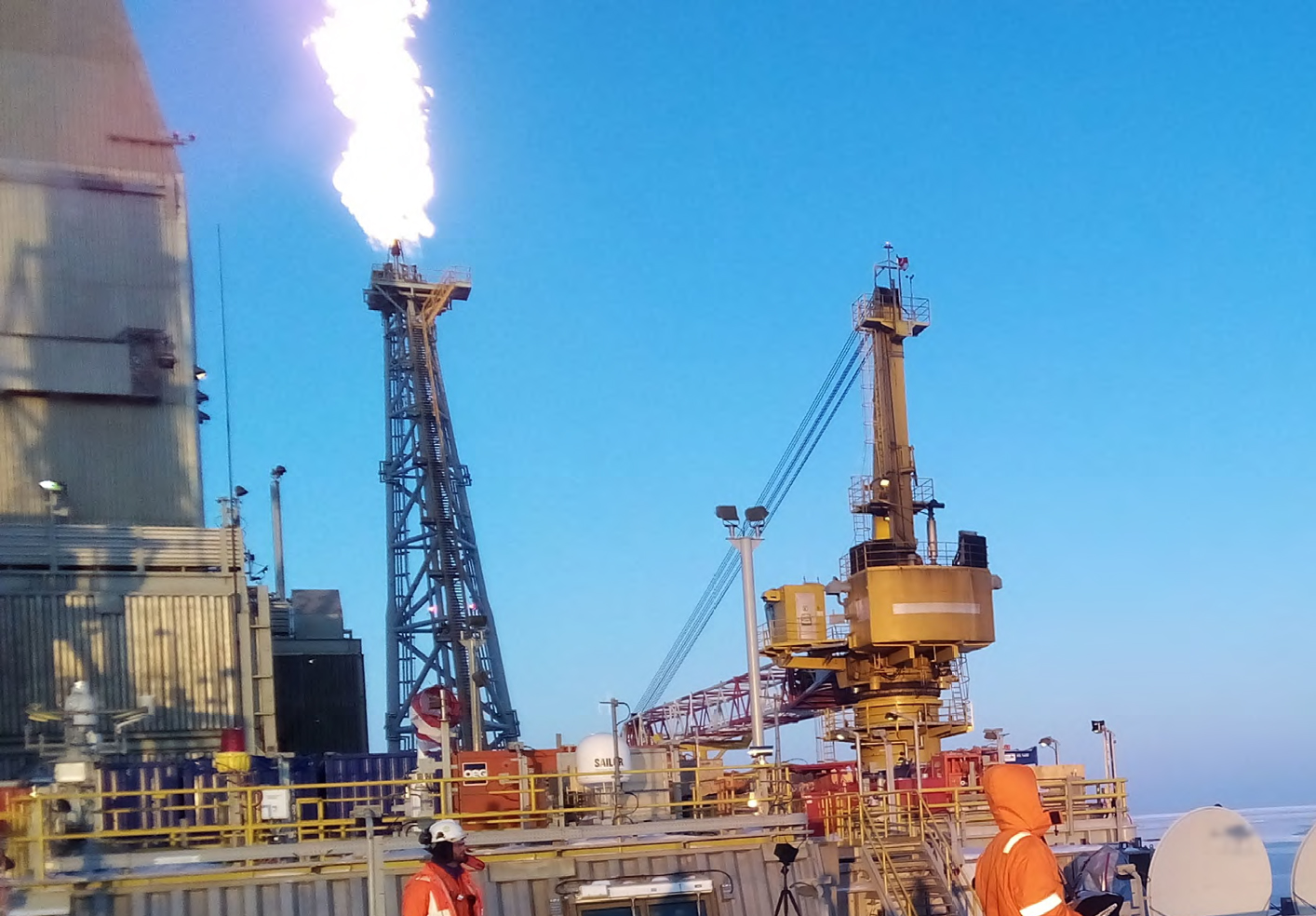 Condor Solutions flew the system in Arctic conditions at the Berkut Oil Rig in 2016. by Renee Knight

In February 2016, Condor Solutions, a Russian-based drone service provider, became the first to fly an unmanned aircraft system (UAS) to inspect the biggest oil rig in the world—and they used the Microdrones md4- 1000 to successfully complete the mission.

The Berkut Oil Rig weighs 200,000 tons and is expected to extract 4.5 million tons of oil every year. At 345 feet wide, 436 feet long and 472 feet tall, the rig is located in the Sea of Okhotsk on the Russian Pacific Coast, which is just north of Japan and in an area known for its brutally cold temperatures.

The size of the rig and the Arctic weather conditions presented unique challenges, which is why they needed a durable, reliable UAS like the md4-1000 from Microdrones. Using this system, the team was able to provide the information the client needed to make decisions about the rig’s flare system. Flying the drone also saved them time and made the process safer for the workers involved.

“We inspected the rig’s flare system, which is the most important system of any oil and gas object,” said Pavel Reichert, of Condor Solutions. “We delivered a detailed report of the complete flare system, including infrared analyzation. Every bolt was inspected there.”

February is known as the coldest month in this area, and during the inspection the temperature came in at -13°F with wind speeds reaching about 27 miles per hour. The rig’s parameters combined with the wind speed led to high turbulences that the UAS had to overcome to complete the mission—which was no easy feat but one the Microdrones system could manage. The Mil Mi-8, a medium twin-turbine helicopter produced by Russia that is typically used for these inspections, has a wind limit of about 18 miles per hour.

The team also had to rely on batteries during the inspection, which were of course affected by the Arctic temperatures, Reichert said. The drone, the base station, the control panel, the camera and the external screen were all powered by battery. The cold batteries reduced the drone’s flight time from 40 minutes to 20, with the pre-check flight time taking a minimum of 10 minutes. Another option involved using cables, but that combined with the cold led to the loss of gimbal stabilization.

With only seven or eight visible satellites, limited GPS signals also made it difficult to fly, Reichert said. This meant the system had to be operated in full manual mode, which, while safer than other methods used to complete these inspections, comes with its own risks. The magnetometer was switched off to eliminate malfunctions.

Thermal analysis was the priority during the inspection, Reichert said, but the team couldn’t fly a standard thermal camera because of the big differences in high and low temperatures. They instead used a thermal imaging system from the Czech Republic based Workswell WIRIS, which offered full radiometric images for precise post processing.

“For me and my guys any offshore work is stressful, but maybe that’s because we’re not the sea guys,” Reichert said of the challenges that came with this milestone mission. “We didn’t have space for any mistakes during this inspection. There was no place for an emergency landing.” 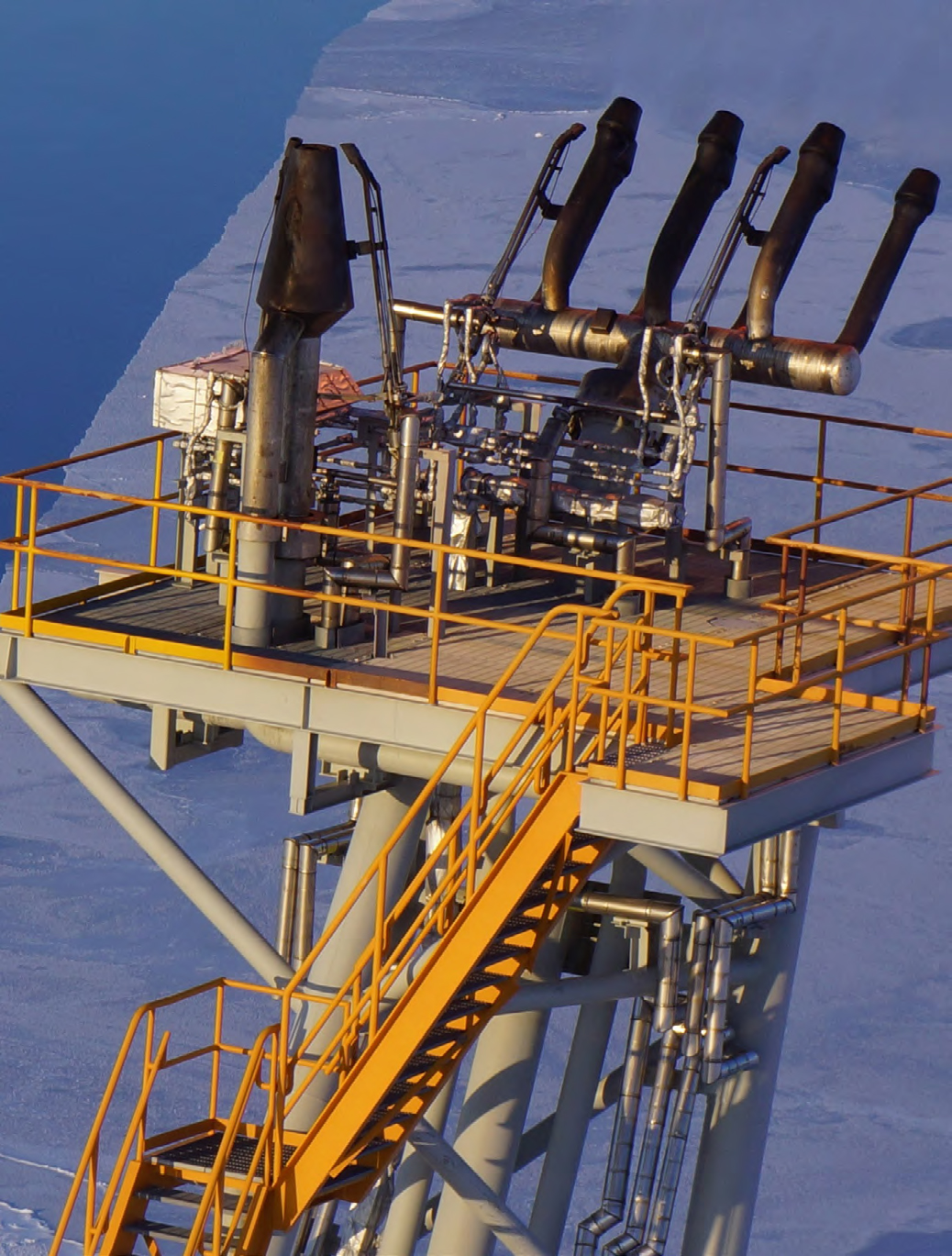 Despite all the challenges, the Microdrones MD4- 1000 performed as expected and completed the mission successfully.

To fly such a massive structure in these extreme weather conditions, the team needed a robust system from a manufacturer they could trust. This marked the first time the rig was inspected via drone, and there really was no room for error.

The MD4-1000 features a drive system that automatically maintains proper flight attitude in changing winds—which was key for this project. It is designed to fly in harsh conditions, including strong winds, magnetic fields, high temperatures, voltage, humidity and any number of environmental factors that can negatively impact a drone’s performance. The system also can handle most popular sensors and carry a payload of up to 2.7 lbs.

The MD4-1000 behaved well during the mission, Reichert said, and was equipped with the features needed to perform this industry first, successfully collecting thermal imagery of the Berkut Oil Rig’s flare system via drone—and doing so in harsh Arctic conditions that most systems couldn’t handle.