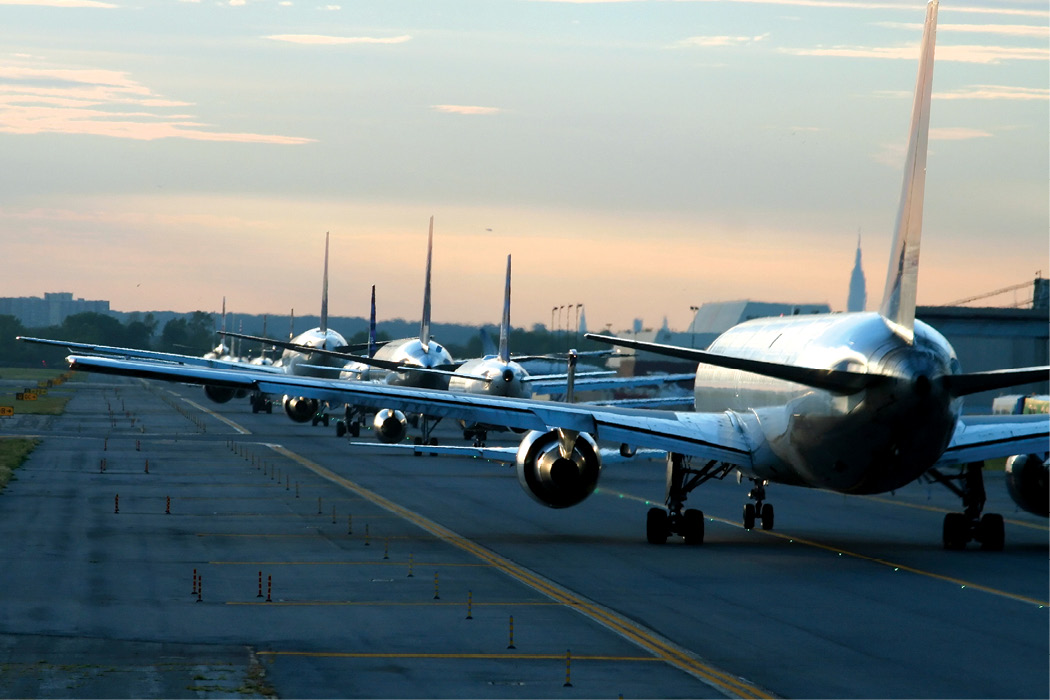 With proper planning and coordination, construction company Brent Scarbrough & Co. was able to fly Microdrones mdMapper1000DG solution in controlled airspace over one of the most active airports in North America.

Lately, there have been plenty of safety concerns surrounding drone sightings at airports. But that’s not to say that UAS cannot actually provide safety benefits in and around restricted airspace.

When the team at Brent Scarbrough & Co. Inc., a Georgia-based heavy Civil construction company was asked to provide topographic maps of areas inside the Hartsfield-Jackson Atlanta International Airport, they turned to the expertise of Flyover Services, a UAV data collection services provider, equipped with a fully integrated Microdrones system.

With the aid of Jake Hinton, a partner at Flyover Services in McDonough, Georgia, Alex Lowry and his team at Brent Scarbrough & Co. received the proper planning and authorization to fly the project missions in areas between the ninth and tenth runways at Hartsfield, which each year is one of the busiest airports in North America.

“We were actually the first ones to actually fly approved inside Hartsfield-Jackson airspace. We fly for a rock quarry that’s inside that airspace,” said Hinton, who originally flew such projects under the Section 333 guidelines and now operates with airport authorities on LAANC (Low Altitude Authorization and Notification Capability). Recently the FAA expanded the LAANC to increase access for drone pilots into controlled airspace, and currently about 600 airports are covered by the capability.

Lowry, who works in as a drone operator for Brent Scarbrough & Co., decided to start looking into using an unmanned aircraft system (UAS) to create topographic maps for construction projects a little more than a year ago. Ultimately the company invested in the mdMapper1000DG from Microdrones. While they’ve worked with the Hartsfield airport on possible expansion of the south cargo area around runways 9 and 10, it was with this latest project that the Microdrones’ solutions played a key role in delivering accurate data at a big reduction in time spent and cost.

“Generally, we’ve been working up there the last three or four years, and there’s a south cargo expansion job that we’ve been working on, with C.W. Mathews [Contracting], for at least a year, year and a half,” said Lowry. “It’s been on hold for about six months and the reason why we flew this last time was to get an idea of how the site is left at the current moment. The data shows a lot of areas where grating has been done, but it’s not finished. There’s not pavement down.”

There are no definite plans by the airport to follow through with the expansion project, according to Pittman, but the airport authorities wanted to know as much as possible about the status of the area.

Deploying the mdMapper1000DG system is more efficient and safer than traditional surveying methods, and provides the information Pittman’s team needs to efficiently complete the job. But working in and around restricted airspace can be tricky. Brent Scarbrough & Co. has worked with airports in the past, including some military installations as well as two previous projects at Hartsfield, but those did not include restricted airspace areas like this latest project does. 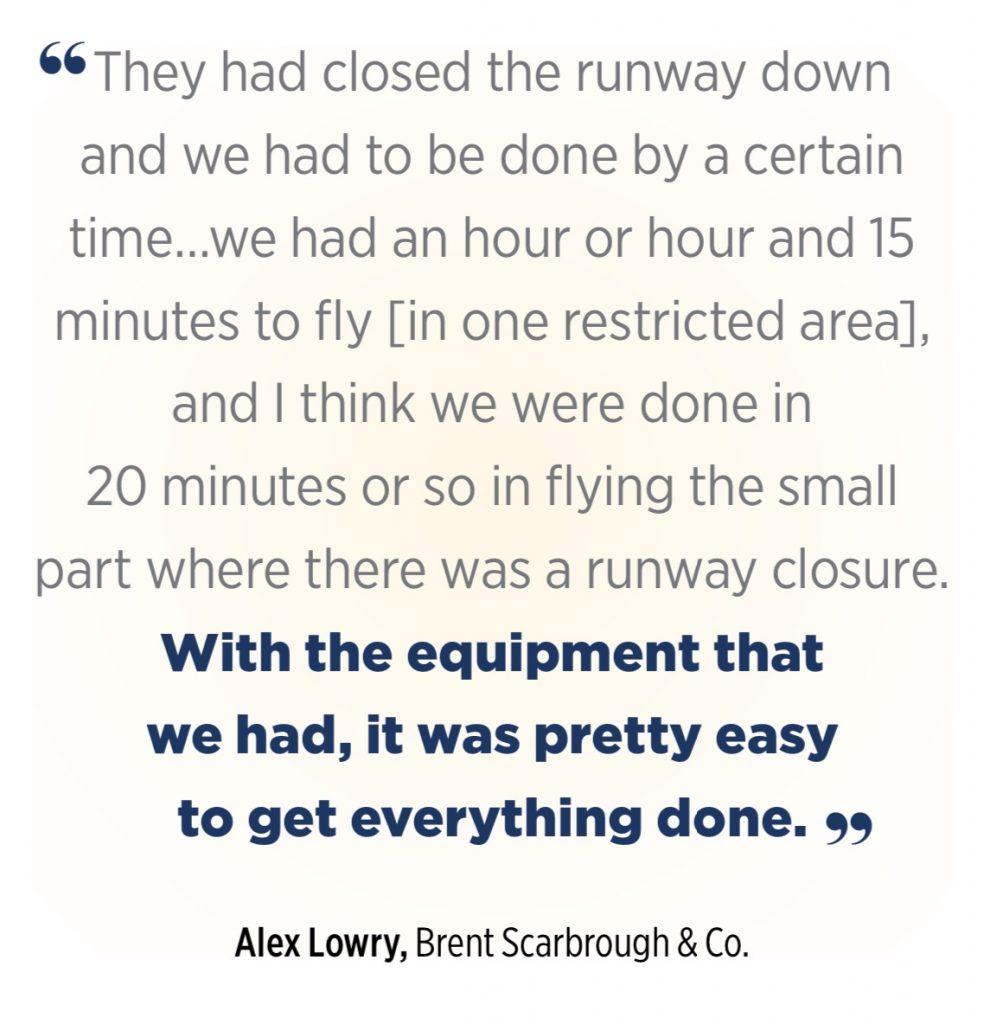 “Brent Scarbrough came to me and I kind of did it as a project management side for them,” said Hinton, who noted that the ability for the mdMapper1000DG system to maneuver in tight spaces was critical for the project. “We helped plan, organize and get the approval for it. I organized all the meetings with the airport and with the engineers. This one was a very complex project. Most of these projects have been outside the airport itself. This one was actually on airport-controlled property.”

Once the approvals were in order, Lowry and Hinton and the rest of the members went to work, flying in the restricted airspace areas within the assigned timeframes.

“The mission focus was to capture the exact ground from Brent Scarborough’s original grading phase. Also, while flying this we are able to capture multiple mosaic images of the entire project site,” said Lowry, “We use the DG (Direct Georeferencing) because it is a highly efficient method for connecting aerial images to their geographic positioning on the Earth’s surface. DG surpasses the accuracy of traditional methods such as aerial triangulation, RTK, and PPK.”

For this project, Lowry said the payload included a Sony Rx1Rii camera with APX-15 imu and that LiDAR was not needed or used. The results were better than expected.

“We didn’t encounter much at all,” Lowry said. “They had closed the runway down and we had to be done by a certain time…we had an hour or hour and 15 minutes to fly [in one restricted area], and I think we were done in 20 minutes or so in flying the small part where there was a runway closure. With the equipment that we had, it was pretty easy to get everything done.”

Easy, Efficient and with an Abundance of Data

“With the DG technology packed into the mdMapper1000DG, we were able to run off a single base station for all three flights. It was three different flight scenarios, seven different take-off and landings and changing batteries,” Lowry said. “But the DG platform is far better than the old school methods of just laying out targets and trying to twist your job to them. It’s been really beneficial for us.”

It all came together for a seamless bundle of information. The pilots were able to deliver accurate contours across three different areas that all ended up in the contour map; it showed as a single map.

“Since the airport had areas that we couldn’t show, couldn’t fly over, we had to show it in three different phases,” Lowry explained. “We almost didn’t do it on purpose, but that’s what happened. The DG platform put us in the same coordinates…we laid out some arrow points, the propeller targets, and throughout the different phases, which helped us bring everything together in a real seamless fashion.”

Hinton, who started Flyover Services with partner Bill Tanner, said the flights required plenty of coordination, communication and, of course, the Microdrones mdMapper1000DG, the best suited solution for this project.

“It was between two active runways,” Hinton explained. “Hartsfield has runways running east and west and they just descend down as you go south. So runway 10 is the southern-most one and runway 9 is just up from there. There’s a pretty good gap between those, so we were essentially flying the area between runways 9 and 10.”

The teams had local airport operation on the ground while they were flying, with multiple visual observers onsite, and direct two-way communication with the airport tower the entire time. They basically were communicating during takeoffs, when on their way closest to the taxi and the runway, and communicating when they finished. 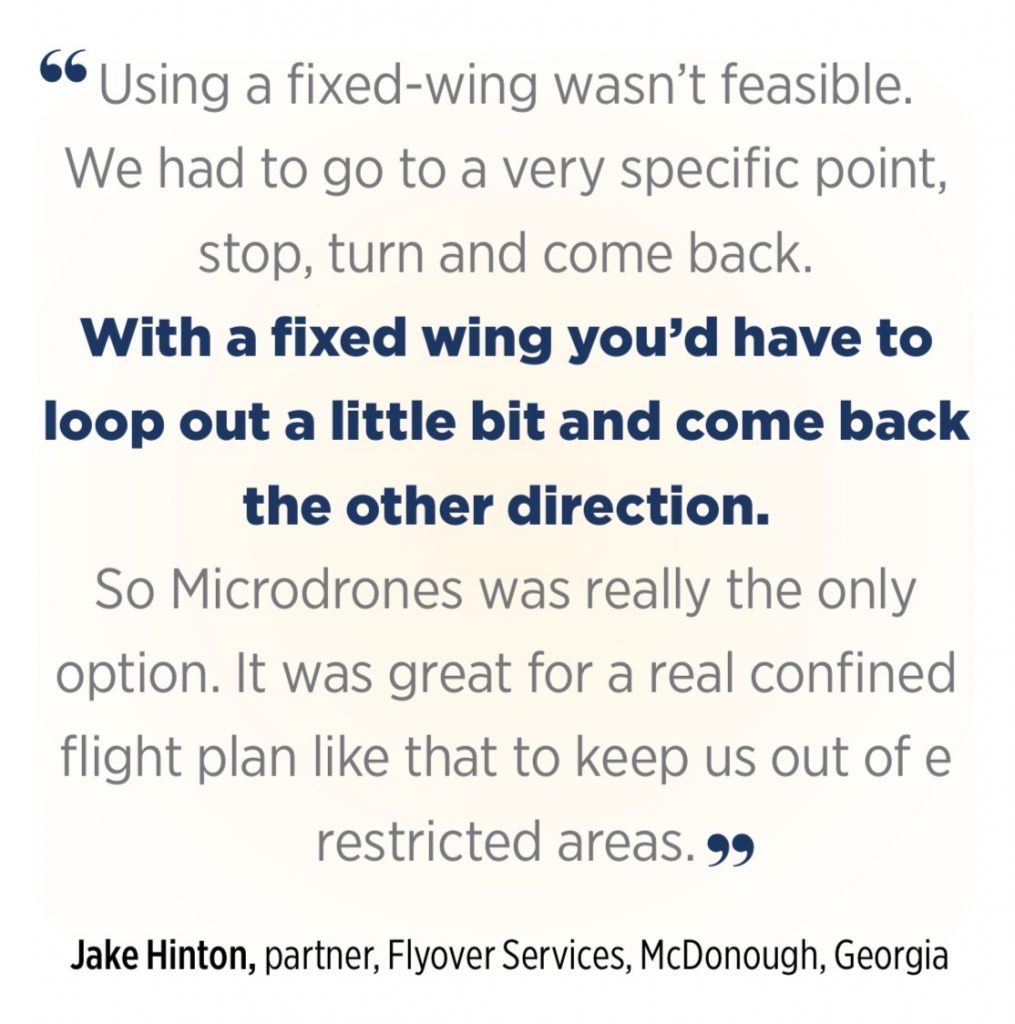 “We had constant communication with the tower and constant monitoring of the drone’s location, altitude, battery, mission percentage, stuff like that. We had a lot of eyes on it,” Hinton said. “We had a lot of cooperation and help from the airport itself, to make sure it was safe. We had many precautions built in and geofencing around certain areas.”

He said the airport has object-free areas designated close to the side of every taxiway because “when a big 747 rolls through there the wings are going to go past the taxiway, so you have an object-free area that you have to stay out of.” Because of this, the team had to geofence that all off, and make sure the drone never crossed into any of those off limit areas.

That’s one of the many reasons why the mdMapper1000DG was well-suited for this project.

“I was impressed with what they had. It worked great for what we were trying to do,” noted Hinton, who has flown fixed-wing units on several projects. “In this case using a multi-rotor was very necessary because we were operating near taxiways and we had such a tight area.

“Using a fixed-wing wasn’t feasible. We had to go to a very specific point, stop, turn and come back. With a fixed wing you’d have to loop out a little bit and come back the other direction. So Microdrones was really the only option. It was great for a real confined flight plan like that to keep us out of e restricted areas.”

The results and the safety also were impactful.

“This is all photogrammetry-based topographic mapping, so essentially we were getting topographic data across a very large site in areas that are highly secure,” Hinton said. “Instead of having to send a survey team out there—and you know some of these areas are dangerous for a person to be in—instead of having boots on the ground out there, were able to knock this out in half a day for something that would have taken a traditional survey team days, if not a week…and as well as get a lot more dense data.”

What about the risk of drones flying around airports?

“People hear of a drone flying around the airport and think danger, but to be honest this was a lot safer,” Hinton said. “We had one little 15-pound drone flying and getting data instead of having a survey team out there in a secure, you know, somewhat dangerous area.”