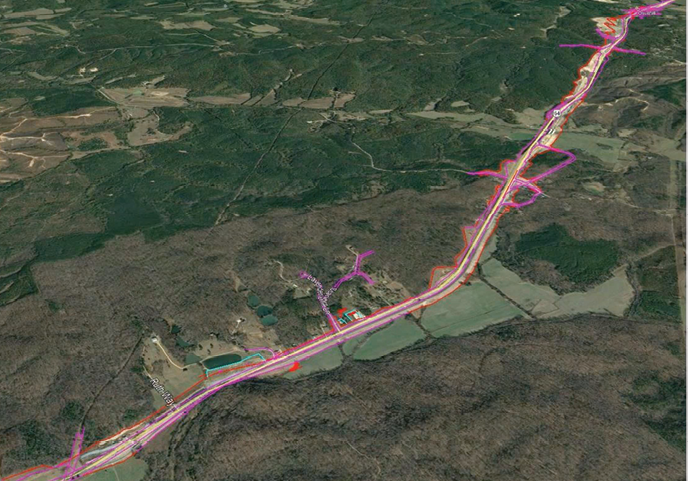 How Crafton Tull employed both the mdLiDAR1000 and mdMapper1000DG to map a seven-mile corridor and save their customer more than 50 percent in the process.

When a client approached Crafton Tull with a project to survey a seven-mile corridor of new highway construction in Tennessee, within a two week period, Nick Tucker, project manager and vice president of the energy division, knew exactly which solution the professional design firm would use: the mdLiDAR1000 from Microdrones.

The client needed a topographic survey, a classified point cloud and up-to-date ortho imagery to create a high-resolution surface model that could be used for quantity verification, Tucker said. To begin the planning process, the team received a CAD file that contained the center line route, the right-of-way and the existing control points already on site.

“After a review of the site, I could see the Microdrones solution was going to be the best tool for the job,” Tucker said, “based on the terrain, based on the size of the project as well as some of the obstacles.”

They knew going in, that, that there would be several challenges, including the terrain change, which could be as much as 150 to 200 feet from the edge of the right-of-way to the center line, Tucker said. Then there was the size of the project, with the right-of-way getting as wide as 500 to 600 feet. The team also had to stay within the FAA’s Part 107 line of sight rules, deal with any weather conditions that popped up and meet the tight two-week turnaround time.

To do all this, Crafton Tull needed a rugged, reliable system that could quickly gather the necessary information, from a company that also provides the tools necessary to efficiently create the deliverables the client required. The Microdrones system met those requirements, while also saving them time and providing a more than 50 percent reduction in costs to the customer.

The Planning Process and On-Site Workflow

The team planned 22 flights with multiple take-off and landing locations to complete the project—13 with the mdLiDAR1000 and nine with the mdMapper1000DG. Most of the initial planning was completed in their office through AutoCAD and Google Earth before the team moved on to building flight blocks through the mdCockpit software. The ability to pre-build the blocks before stepping foot on site is just one of the ways using the mdLiDAR1000 saved them time.

Once on site, the two-person team flew the mdLiDAR1000 at 50 meters with 60 percent lateral overlap. They used the same take-off and landing locations for each flight, generally completing multiple flights from the same spot so the crew could monitor the UAS without having to move around. Alignment way points were used at the beginning and end of each flight block to make sure trajectory and orientation are accurate during post processing.

They also used a feature called terrain follow to ensure the drone stayed at a consistent height above the terrain throughout the flight, Tucker said. This was critical to making sure the data stayed consistent when outputting point cloud or imagery and creating the deliverables.

The mdMapper1000DG workflow was basically the same for the flights that collected the ortho imagery, except the drone flew bigger flight blocks at 120 meters with a lateral and forward overlap of 70 percent, Tucker said, which is key in top wind extraction for imagery.

When it was time to start the project, the team left their offices in central Arkansas on Monday morning and arrived onsite about 1:30 p.m. Because the mdLiDAR1000 is so easy to use and set up, they were able to complete three flights by the end of the day, Tucker said. They finished the remaining 10 LiDAR flights the next day. On Wednesday, they started setting up the ground control points for the mdMapper1000DG, though they needed fewer because of the system’s direct georeferencing capabilities, which precisely connects aerial images to their geographic positioning on the Earth’s surface. A rain delay kept them from flying that afternoon, but when the weather cleared on Thursday they were able to complete all nine ortho flights.

“We flew the entire seven-mile corridor for imagery in one day,” Tucker said. “That’s an average of one flight per hour and that includes set up, tear down, take-off, landing, actual flight time and moving from location to location up and down the corridor.”

The team then spent Friday morning running initial checks on the LiDAR and imagery collected to ensure the field crew had the information they needed. In all, the project took 50 hours to complete—including travel time and delays. Processing took about two days, with another two days to complete the deliverables. So after just nine days, Crafton Tull was able to give the client exactly what they were after.

Using conventional methods, this project would have taken about 12 working days in the field, Tucker said. The drone completed that part of the project in five. With the drone, the design firm saved the client 66 percent in field work costs, which Tucker found is consistent with other projects they’ve completed via drone. Savings typically run between 40 and 70 percent, depending on the size and location of the project and the assets the client needs.

This is just one example of how the integrated systems from Microdrones have improved efficiencies for the Crafton Tull team, UAV Survey Coordinator Jeff Davis said, and they use it for a variety of the survey services they provide. With the system they can improve safety, reach once inaccessible areas and cover more ground in one day. With the mdLiDAR1000 they can cover about 200 to 250 acres per day and 450 to 500 acres with the mdMapper1000DG projects that once took several weeks can be completed in a day or two, and this improved efficiency is certainly something clients have noticed.

“The quality of the data that we’re seeing is unparalleled,” Davis said. “We get multiple returns with the LiDAR so we can penetrate the canopy and get some lower vegetation and we get ground data as well. We’ve worked with other UAVs in the past but what we’re seeing from the Microdrones integrated systems is superior. Since we’ve been using the mdLiDAR1000 we’ve gained several new customers and clients who are giving us repeat business. The investment has definitely been worth it.”